that's all she wrote 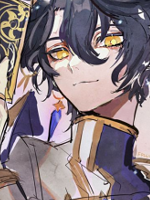 Just checking in on y'all, since you've been somewhat quiet. Hope character crafting's going well. Remember, if you have any questions, please let me know.

Yeah, all's well. Really just looking forward to Saturday rn, so I'll have time to properly work on the sheet. A lil hectic 'til then. :')
In Final Fantasy: Lightseekers → 2 days ago Forum: Casual Roleplay

@Vertigo Gunblades are kinda their standalone thing in this setting, think of Thancred from FFXIV or Squall from FFXIII ^^ But I like your ideas~

Aw, okay, so variations don't really exist! Also might be a stupid question but-- can you actually shoot with a gunblade? From what I read it seems like you just use the gun portion to power up the blade itself ): (haven't played any FF game that had them, so never seen them in action).

As for sharing ideas, I know I'm making a male Viera, but kind of flip flopping between two very different personalities atm. Speaking of, got some questions about Viera in this AU specifically:

- Are the males and females separated still, or do they all function in the same tribe, just with the females in lead roles?
- Do male viera tend to be submissive by nature or is that a cultural thing? I'm sure exceptions exist either way, but just to know what's the norm!
In Final Fantasy: Lightseekers → 3 days ago Forum: Casual Roleplay
Might go for a gunbreaker, seems very cool and haven't seen it mentioned yet. I wonder if instead of a "big sword, big gun" like googling seems to suggest, it can be like... dual pistol daggers? Hmm.

Secondary options are rogue or gunslinger.

"Of... of course," Fellwing half-whispered, sheepish, as both Shieldwing and Echo herself suggested they move their conversation elsewhere. She bit her lip, shuffling her wings impatiently as the red drake went through introductions. The Seer understood Echo was not in the best of shapes to talk, but that was precisely why it was important they skipped pleasantries and cut straight to the chase. Lives were at stake! Surely names could wait.

Even the bubble ride deeper into the cave, something the black drake would have rejoiced over in any other circumstance, felt excruciatingly slow now. Breathtaking, educational - but slow. And, after Stargaze's comment regarding its current state, also somewhat morbid. Fellwing decided she preferred the vast open skies to the suffocating world underwater.

Reflexively, Fellwing gasped as the bubble brought them back to the surface. Her first few steps on solid ground were shaky, and the orange drake in her vision seemed to wobble. Moons, where was her balance. She was still readjusting to her surroundings when Stargaze and Shieldwing recognized the injured drake - and the latter picked a fight. Because of course he did. "Shieldwing, this is not the time or place!"

Fellwing walked next to Stargaze, pressing into her side to drape a wing over her as if to comfort her clearly scared friend, then turned back to... Kyte, was it? "I do second my clutchmate's question, however. We're trying to figure out what happened here, as well as how to make things right again. Anything you - anything anyone here can tell us would be much appreciated."
In Epyllion: Beyond Moonlight's Reach → 6 days ago Forum: Tabletop Roleplay
A'ight, I'll get a post up tomorrow!

Edit: super tired so just a quick post, but done.
In Epyllion: Beyond Moonlight's Reach → 6 days ago Forum: Tabletop Roleplay

@Guardian Angel Haruki Would the bullying and Kyte's role in it be something the rest of us know? Just so I can have Fellwing react appropriately!

Wanted an answer to this before posting, preferably! Shieldwing seems to know at least, but he is also probably closer with Stargaze than Fellwing is, considering the history.
In Epyllion: Beyond Moonlight's Reach → 7 days ago Forum: Tabletop Roleplay
@Guardian Angel Haruki Would the bullying and Kyte's role in it be something the rest of us know? Just so I can have Fellwing react appropriately!

Also, on the subject of trauma, let me share with you this gem I got when messing around with the Incorrect Quote Generator a while ago. I got a few, but this was probably my favourite: