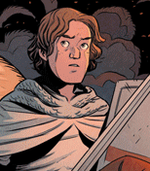 In "To Wear the Throne" → 8 mos ago Forum: 1x1 Roleplay
As Kengetar walked down towards the shore he grinned, as much at the glorious display of flesh as the terror he was able to evoke in prudish Northerners just with his presence. His smile continued to widen as Melody sauntered over to a blanket loaded with pillows and gestured for him to join her. He found that the fight had created a strange tension between them. The wrestling of their bodies...

Then his glance fell across her shoulder and noticed Elbara standing in the lake, watching him. His smile faded. Ah, so this was going to get complicated, he thought to himself. They hadn't spoken a word to each other since she had gotten married. Why would she follow him now? He tried to turn his gaze away from Elbara, but didn't quite succeed; she hovered in the corner of his vision. He walked over to the cushions were Melody was waiting and sat down, waiting for her to speak.
In "To Wear the Throne" → 8 mos ago Forum: 1x1 Roleplay
Broon and Kengetar looked at each other, both equally shocked. Kengetar had never expected to be given command of anything. Giving a shrug, he left the tent and took up his command.

After adding his Sedent volunteers to his Yallan force, he led them to the trail he had found. Each of them was armed with an axe or some sort of cutting tool, and set to hacking. They were making good progress, but once the rain began to pick up, the Yallans lagged. Southern tribesmen were inured to the sudden rains of the region, but Kengetar realized that the lowered visibility was a problem. The Roki hunter might return with allies, and he wanted to see them coming. So Kengetar called the work off for the day, and hoped that the trail would still be passable after the rain ended.

"Nice bluff, but you won't," he shot back. "All this time you've been playing at the conquering warlord, but all you Yallans are soft." Without stopping for a breath, he shot into another insult. "There's no explanation for your victories but luck, since none of you have the skill or courage to do things by yourself. And we Sedents don't threaten a man's family when we have a grudge. We take them head on, because we're not afraid of a fight."

Kengetar seethed, waiting for a response, whether it be a volley of angry words or a physical attack. He was doubly armed now, and felt confident.
In "To Wear the Throne" → 9 mos ago Forum: 1x1 Roleplay
Kengetar snorted. How was she going to act bothered when she had called him? "It's unwise to send your servants to leash me while I'm solving your problems," he said accusatorily. "She almost died, by the way. You're welcome for that, too."
In "To Wear the Throne" → 9 mos ago Forum: 1x1 Roleplay
Kengetar was already on his way back. He had found a small trail that was relatively dry, and rejoined with the main footpath after not too much distance. True, it was too small for the carts, but with a day's work, the undergrowth on the sides of the trail could be cleared away and there would be enough space for the carts to role by. And it was also true that he had been forced to avoid a pair of Roki Tribe hunters, but he seriously doubted that the caravan as a united force would be under threat. Of course, with the threatening rain, it was only a guess if it would still be usable after today. This wouldn't even be an issue if we were using boats, thought Kengetar.

Suddenly, he heard a scream that was quickly cut off, from a direction that was nearer to camp. Concerned, he crept towards the source of the sound. The source of the sound came into view in a clearing just off the trail. It was the two Roki hunters from before, and they were evidently pleased with their catch. In their arms they held their struggling captive, which Kengetar recognized as the young servant belonging to the caravan's leader. He didn't know what had possessed her to go out into the forest alone, but it was a stupid decision. No tribe in the South was as dangerous as the Sedents, but anyone found out alone in the wilderness was fair game. The girl would likely be sold to slavers traveling North, if she was lucky.

Kengetar crept closer, unnoticed even as he drew close enough to the back of one hunter to touch him and drew his knife. Almost casually, he stepped into the clearing and slipped his knife between the ribs of the hunter. As the hunter fell, Kengetar threw back his cape, flashing his predatory grin and tribe-identifying tattoos.

The other hunter backed off and began to run, nearly dropping his bow, the girl and his fallen comrade forgotten. Kengetar didn't chase him. He doubted that his knife would be any match against his bow, but if he acted confident, the hunter might be convinced that there were other Sedents hidden nearby, and wouldn't stop running until he was halfway back to his tribe.

He then turned his attention to the servant girl lying where she had been dropped by the hunters. Not seeing any obvious injuries on her, he picked her up and asked, "Why did you come out here alone? Don't you know it's dangerous?"

"Melody sent me to find you," she lied, thinking fast. "She says you have to come back."

"My mistress," she said. "I'm Frandy, by the way. Thank you for rescuing me." She pressed her head and arms into Kengetar's muscular chest in a way that was a bit too sensual to be merely appreciative.

Kengetar sighed. Evidently there was some trust that Melody had withheld from him. But the softness of Yallans was quickly becoming apparent, and aggravating. He picked up the fallen hunter's bow, quiver, and knife. No sense in letting them go to waste, after all. Frandy was going to be a problem, though. Her uncareful steps could easily lead more unwelcome guests to them, and that would be a death sentence. There was simply no helping it, unless...

Frandy yelped as Kengetar roughly lifted her and slung her over his shoulders, and gripped her arms and legs like she was a slain deer. "Don't talk until we're back at camp," Kengetar said, and took off jogging down the trail.

When Kengetar got back to camp and planted Frandy back on the ground, it was already beginning to drizzle. She stood looking embarrassed for a while, then said, "Mistress is in the women's tent, I have to cook the midday meal, thankyougoodbye," then ran off to the cooking tent. Kengetar shrugged, then went to the women's tent and impatiently rapped on the flap.
© 2007-2017
BBCode Cheatsheet