STATUS: For anyone dealing with someone who annoys the living hell out of you: youtu.be/OLpeX4RRo28 1 yr ago 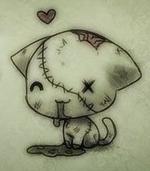 1 yr ago
Current For anyone dealing with someone who annoys the living hell out of you: youtu.be/OLpeX4RRo28
1 like
6 yrs ago
Another sleepless night.... Yay.... >.<
3 likes
6 yrs ago
Be gone till 10
6 yrs ago
If someone puts your work down the sink does that mean you can say the garbage disposal ate my work?
3 likes
6 yrs ago
@Otaku95~ *glares at you and raises my hand next to your favorite breakable item* I take offense to that..... -_- *takes my hand and swats item onto floor and watches it smash into a million pieces*
3 likes

Also yeah, it was interesting! :3
In Spells of the Night (Closed for Now) [16+] → 6 yrs ago Forum: Casual Roleplay
@Karl Kadaver
Clarissa Clearwater

Apparently it was her lucky day! In a bad sort of way, that is, as one of her informants too late, explained to her that she was now pretty much surrounded by Hunters. Just play along Clari,and they'll never know what you are! She thought to herself, smiling before giggling.

"So, a challenge is it? Last one who challenged me didn't make it out alive!" Clarissa giggled again though before she added, "Though it wasn't my doing! Alcohol poisoning is a bitch!" She drank the mug of hard ale that was in front of her and lifted it up to him, saluting him as gratitude for getting her a drink.

But also secretly it was a promise, a promise that she wouldn't use her powers to cheat. "Well, anyways, I'll give you a 5 minute head start as I just drank my 23rd mug, so I suggest you get drinking!" Clarissa said with a wink, sipping her ale while she passed the bar tender a small stack if pounds, knowing this would probably be a long battle.

Her horns were hidden thanks to a potion but unfortunately it was would it's power if it started to rain. This man radiated an aura she had only seen once before with her mother and father, though his aura would change when he looked at anything besides her.

I guess I'll be seeing this hunter again! It is after all fated to happen! She thought to herself, smirking as she knew that fate had fucked her over. She was destined to be with a hunter? Oh yes, the universe was fucking her over badly, and she knew it. How could she ever love a hunter?! It was absurd! Yes he was well-built, handsome, probably charismatic and a huge.... Partier.... But that didn't mean a thing!

Clarissa was distracted from her thoughts for a moment when she heard the owner yell at the poor wolf, feeling bad for her. She paid for a raw steak and the bar tender brought it over to Fenros, waving and smiling as she hoped that his wold would enjoy the steak that she got. She had a soft spot for animals, always had, and so she was doing this for the wold, not her master.

Electra's ears picked up the thud, knowing now that it wasn't a deer at all. She turned into an owl once she had climbed out of the water, her clothes seeming to disappear into thin air though in actuality they were just magically teleporting to her body once she shifted back into her human form.

She immediately saw a young man who was bleeding, sensing that he was a hunter but she didn't care. He was too hurt to hunt her and she'd rather have a fair fight and let him die with honor rather than kill him without it. She landed on the ground and transformed her clothes having appeared on her as soon as she had started. She kneeled down and sat back on her legs, looking at his injuries.

"Just.... Hold still, alright? We both know we're enemies but you're hurt and I refuse to kill someone who is hurt as there is no honor in that." Electra explained, slowly reaching out her hand and gently touching his wound. It was a slight gash though it was feel it was a good sized one, and she knew if she didn't get some cloth or something to wrap up his head with that he would most likely die from blood loss.

She pulled out the roll of white linen she kept for herself just in case of an emergency or if she turned into her dragon form again and got cut up quite a bit. She quickly and expertly unraveled the linen and wrapped it around his head, hoping that it would be enough till he could find a weakling to heal him up.

"You should be alright till you can find one of those.... Weaklings. Can you stand?" She asked, knowing that if Medusa saw her she'd have her head for this. But she just couldn't do it.... She was still partly traumatize after her father killed her mother when she was already wounded after he drunkenly beat her and then murdered her in her unconscious state.

She was evil, she knew that, but unlike some she had standards, and this was one of them. Electra stood up and offered him her hand, having a strong grip and a stronger pull thanks to the dragon inside her.
In Spells of the Night (Closed for Now) [16+] → 6 yrs ago Forum: Casual Roleplay
@Aerandir

As I said before, the time period was just a reference. I also explained that this is basically a parallel world to earth and we never really advanced in science all that much. Terminology is not a huge thing, just as SillyGoy said, just don't use things such as the internet or vaccines, or anything too modern. You can use common modern phrases just don't go over board, you know? ^~^

So now that everyone has posted go at it! ^~^