2 mos ago
Just had two great birthday dinners in a row! Burgers from my darling chef on by bday, and then Chinese and Carvel cake the next. Food is the best gift a girl can ask for. =)
2 likes
2 mos ago
Work, chores, sleep, fun. Pick three.
3 mos ago
Discord is a great way to get to know your fellow roleplayers, but it should not be a requirement. The OOC can be used to communicate just fine. =)
2 likes
3 mos ago
Anybody like animal people? Stuff like Beastars, BNA, Bojack, Zootopia, Sonic the Hedgehog? Please check out Animalia! roleplayerguild.com/topics/…
2 likes
3 mos ago
Does anybody else feel alien, or at least not completely human?
3 likes

Large group (5+ characters)
Fandom roleplays, animal or anthropomorphic characters, animal companions (like Pokemon or dragons), superheroes
While I thoroughly enjoy roleplays with romance (not smut), the hubby says no, so please don't encourage any romantic relationships. Thank you!

In :ὁ Animalia [OPEN!] → 21 hrs ago Forum: Casual Roleplay
Welcome back, @Martian! Jumping right back in is fine by me. ^_^ Nice post, by the way. My character is an anime fan as well... maybe I could have her join, too.

In Flower Power! - A Plant-Inspired Superpowers RP → 1 day ago Forum: Casual Interest Checks
@Zanavy It's a placeholder name, but I love corny stuff like that so I might keep it, heh. XD

Oh, and I came up for an idea for corn! In the heat of battle (or a fit of rage) they bulk up like the Hulk. Or alternatively, they can store up energy to be released in the form of fireworks.
In Flower Power! - A Plant-Inspired Superpowers RP → 2 days ago Forum: Casual Interest Checks
I would like to reserve the dandelion essence, please. =) Too tired to finish a sheet tonight, though.... 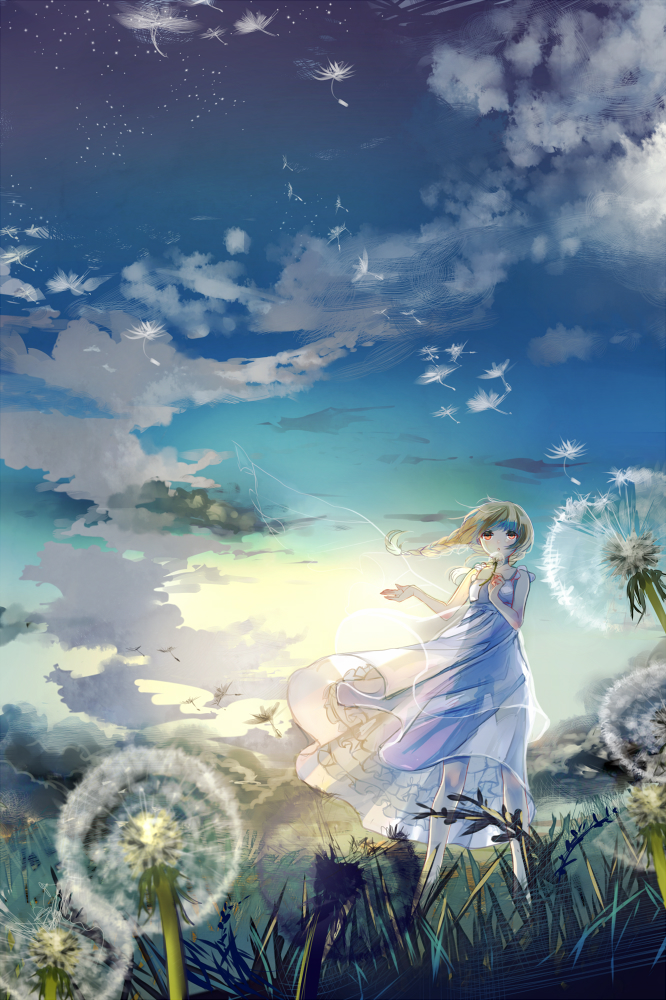 Danielle is rather plain and average looking, never one to stand out in a crowd. She is not ugly, but "pretty" at best. Her hair is grown out long and is blond that almost appear green in poor lighting, but golden in sunlight. Her skin is pale and somewhat translucent, making injuries and blemishes more apparent. Her eyes are hazel, some parts more gold and other parts more green in appearance. She has an average bust, small rump, and slight belly.
Gender: Female
Age:
Occupation:
Plant Essence: (what kind of plant has connected with your character and given them a superpower)
Superpower(s): (aim for a 2 or 3/10 on the powerful scale with a potential to scale up over time)
Personality:
History: (should include when their plant connection started)
Miscellaneous: (optional)
In Flower Power! - A Plant-Inspired Superpowers RP → 2 days ago Forum: Casual Interest Checks
I haven't decided on a power or character that's right for me, but here are some ideas free for the taking or for inspiration.

Clover/Shamrock: Brings good luck.
Jalapeno or Habenero: Body fluids contain capsaicin. Capable of spitting/spraying "pepper spray" naturally.
Nightshade: Body fluids contain potentially deadly poison and/or control over shadow/darkneess.
Thistle, Cactuses, other spikies: The hair on the person's body are sharp and "sticky". They may be launched similarly to tarantulas
Plants with burrs: May summon or produce burs which may be used to track and spy on targets through a mental link, and/or be used as spiky, thorn grenades.
Sunflower: Absords and releases solar energy.
Aloe: Body fluids contain a super healing ointment and/or healing touch.
Durian: Produces a horrible, unbearable stench.
Carrots: Enhanced/keen eyesight, but "carrot top" hair.
Peas: May mentally link with up to two other people while touching.
Tomatoes, Passion Fruit, and other aphrodisiacs: control and/or manipulation of emotions, hormones, or pheromones. May be graced with charm or good looks.
Watermelon: control/manipulation and/or production of water.
Pumpkin: Transformation into a monster with a Jack-o-lantern head.
Pomegranate: Blood magic and/or manipulation.
Pitcher plant: Able to dislocate jaw to consume large items. May digest anything.
Catnip: Attracts felines (including wildcats) and has limited command over them. (Attack, defend, stay, go, etc.)
In Brother Bear / Totem Animal Transformation Inspired Roleplay → 2 days ago Forum: Casual Interest Checks
The basic idea is that a group of either high school friends or college students visit a real shaman to learn more about the tribe and their ways. The group agrees to participate in a coming-of-age ritual that results in young visitors transforming into their totem animals in order to learn a lesson (about love, trust, courage, friendship, generosity, humility, etc) in order to be transformed back.

As animals they are able to understand both animals and humans, but can only speak with other animals.

Is anybody interested? Would anybody who is familiar with native Americans be willing to guide and/or GM this roleplay?
In Flower Power! - A Plant-Inspired Superpowers RP → 3 days ago Forum: Casual Interest Checks
Oh, sounds interesting... Now to just drum up enough time and energy and inspiration....
In :ὁ Animalia [OPEN!] → 6 days ago Forum: Casual Roleplay
@Argetlam350 Both sound like great, though thoughtful changes. =) Not too long ago I tweaked my character's ancestry to make her more of a mutt (more common in lower class animals.)

I don't have any clear plans right now (I'm sorry to admit I've lost a lot of steam due to recent events) but I was thinking our characters could check out the club booths, where the animal elitists and human supremacists will be trying to recruit. And there may be one or two more sketchy booths I have in mind....
In :ὁ Animalia [OPEN!] → 15 days ago Forum: Casual Roleplay
Melanie Rose PourriThe Eukary Quad, 8:30AM.
"Mmph, mph, mmm... ah! This human-food is so good!" Melanie exclaimed happily between mouthfuls. The two girls sat at a picnic table near a food truck. Her eyes were closed with joy and her snout was covered in fine powder. "Yeah, they invented the world's best food-pizza!" Kayla heartily agreed. Melanie chuckled, knowing that Kayla could eat pizza everyday, three times a day.

She tore off another piece of fried dough, chewed thoughtfully, then swallowed. "Want to check out the club booths before it gets too busy?" Mel asked. She wanted to check out the chess club booth before the event and maybe visit Nolan at the Write Club booth, if she didn't chicken out first.

"Sure, why not? We'll be here all day anyway. There's more than enough time for everything," Kayla replied. Melanie smilee and nodded, her face stuffed like a chipmunk with fried dough. She swallowed, then licked the powdered sugar off her claws. "Alright! Let's go," Melanie answered enthusiastically.

The girls got up from the picnic table and put their plates in a nearby trash bin. Mel brushed the sugar off her snout and light jacket, a smile forming on her face. Her tail had a slight lift and a wag (a sugar rush?) As they started off toward the club booths.
There must have been at least 20 different club booths, of all different shapes and sizes and run by different kinds of animals. As it was still fairly early in the morning, there were only one or two animals visiting any given booth and some had no visitors at all. Some booths just had a person or two running it, handing out brochures or flyers but some were more interesting. Some clubs, like the chess club, even had events on the itinerary.

They walked pretty fast past the sports teams and clubs, neither girl having interest in those. Then there were the nerdy clubs, like astronomy club and science club, and Mel slowed down as they went by, to look at the cool bubbling vials and telescope. Then there were arts and hobbies clubs, which Mel was most interested in. The anime club had lots of neat toys and two animals were reading manga between visitors. The book club people had a book on display and a sloth was offering to give a copy to new members. There was a Scrabble match going on at the board game booth. Two animals were having a Pokemon battle in the videogame booth. Two reptiles were keeping warm under a heat lamp at the sunbathers Club. The cooking club was giving away free samples (which were wonderfully delicious).

Then they finally came across write club. Melanie's heart raced faster and faster as she approached the booth. A lion with a beautiful wavy brown mane was leaning over the table, talking with three other guys: an ostrich with wild curly hair, and an alpaca with long curly fur that covered his eyes, and a tall elephant with a few curly hairs on his head and a shirt that read,'Not the elephantine the room', altogether a group that seemed oddly familiar. The boys seemed to be focusing on a piece of paper in Nolan's paws, until they saw the girls approaching.

"Hey, good morning girls! Didn't you two go to high school with us?" the elephant asked with a friendly wave. "Oh, um, I don't know..." Melanie mumbled almost inaudibly. She scratched herself behind the ear, pulling a blank. Her eyes fell on Nolan, who folded up his paper and put it away, smiling almost shyly. Mel smiled back and looked away.

"Hm, yes I believe we were! Same year, too. Wolfewood, right?" The guys nodded, remembering. "Yeah! Yeah that's right. Small world, isn't it?" the elephant agreed. Melanie looked in awe at the group, her eyes wide with surprise. She went to school with all these guys, including Nolan, and didn't know? Wow, she really was loser loner through high school. She was lucky one of her few friends had gone to the same college with her, or else she could have been completely alone!

"I'm so glad I got out of that town. Bunch of wolves-- Oh, um, no offense," the ostrich apologized. Kayla shook her head. "No offense taken. They were a bunch of animals. I'm happy to escape that small town, Kayla replied good-naturedly. The boys smiled and nodded. "Oliver. And that's Coby, Brett, and Nolan," the elephant explained as he gestured from himself, to the ostrich, alpaca, and lion. The guys said their greetings.

"Thank you. It's, ah, nice to get reacquainted. I'm Melanie," Mel shyly introduced herself, looking towards the ground. "And I'm Kayla. Nice to see you again!" she said with a friendly wag of her tail as she started walking away. Melanie held back, smiling shyly at Nolan but struggling to say anything. She clasped her paws nervously.

"Why don't you check us out at the Open Mic coming up? No pressure, you can just watch and enjoy some free food and drink," Nolan offered, handing Mel a brochure. Mel smiled and nodded, taking the brocure before shuffling after her friend.