Shipper of the Qrow and Winter Movement!

STATUS: When you write a big post: "Well, Big Bertha is back in action!" 2 yrs ago 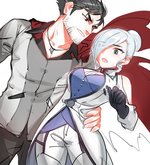 2 yrs ago
Current When you write a big post: "Well, Big Bertha is back in action!"
4 likes
2 yrs ago
Responses will be on the way, just body has decided it needs sleep right now and there's nothing I can do.
1 like
2 yrs ago
Dear lord I hate being awake during the night... I just want a normal sleep schedule, is that too much to ask?
3 likes
2 yrs ago
*me looking at the status bar and seeing everyone talking about Princess Fiona's thick cakes* God I love this site.
2 likes
2 yrs ago
@Shadow Dragon I'm always down to participate in a reenactment of the death of Caesar! *Laughs evilly as well creating a chorus to serenade the devil*
1 like

Well... Here we are at the gallows. I honestly didn't think that today could get any worse but hey anyone who thinks that usually doesn't end up at the gallows right? Yay me for being such a special gal. Anyways, maybe I should explain how I got here right? I was living a life of luxury as the king's consort when all of a sudden the moron just up and dies, apparently poisoned from his precious wine. His queen, absolutely jealous of me by the way, swears up and down that I'm to blame all because I got jealous that she was pregnant and I wasn't.

Like I'd be jealous of her having the bastard's son, the guy could barely get it up and honestly I was quite happy that he couldn't. I mean, if you saw this king you'd think he looks far more like an ogre. I mean, God, I just had to be sent to the palace by my parents to marry this old guy so they could get ahead. Well, they're about to get a head, but unfortunately that head will be mine. So after they found a bottle of poison in my room, which I swear was for me just in case I decided living like this wasn't worth it anymore, they went and decided that I was guilty without a trial!

So now I'm up here about to have my head chopped off, and all I can see is this Queen's face as she stares at me. I swear she's getting off to this, otherwise why would she look so damn happy? Well, if this is the end, see yah never world and good fucking riddance!

So your character brings my character back as he enjoyed her personality as she doesn't give a damn what she says or who hears, but he brought her back to before his father's death and explains what has happened as she remembers her death quite well to both of their surprise. He explains that he wishes to kill off not only his father but to have his mother take her place on the gallows, though of course she wants something in return. So he offers her to become his one and only queen, no mistresses or princess consorts.

He's good looking and has power will give her the ability to change the world for the better for all women she takes his offer. So the role play consists of them getting closer to one another, plotting the king and queen's demise, perhaps having some wacky midnight randevous, and tormenting the old queen for the hell of it. The role play is just a mix of dark comedy, romance, drama and time travel more than once should they fail numerous times. The idea isn't completely solidified so we have plenty of room to play with ideas, so I'd love to hear your thoughts and ideas if you're interested in the plot!