STATUS: When you're still terrible at the language you've been speaking most of your life orz 9 mos ago 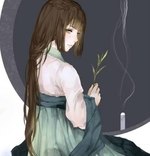 9 mos ago
Current When you're still terrible at the language you've been speaking most of your life orz
7 likes
9 mos ago
I'm back! Well... kinda
4 likes
10 mos ago
When you wanted bright red hair, but your black hair says nah, and now you only have a red shine
3 likes
10 mos ago
My great grandma looked like a mixed-blood, but she denies it. Guess I'll never know if I'm part Russian
1 like
10 mos ago
tfw you can only listen to instrumentals cuz you can't process thoughts while listening anything with words
2 likes

I just realized that all I do is PM, hang out in the status bar, and post in spam games... so uh, here's a little about me XD

Feel free to call me Evie, its one of my aliases. I go by a lot of names, tbh. I don't know if that's a good thing or bad thing tbh.

I've done a bit of RP back in middle school/high school, and haven't touched it again until COVID made me question my hobbies. Sometimes I think I'm a decent writer, but most of the time I feel like I still write like a teenager. I mean, I still act and live like a teenager... Oh yea, I also write at snail speed QwQ

As a self-proclaimed hardcore weeb (not the cringey type I swear), I'm well-versed in the anime/manga scene. If anything I probably know more of the obscure stuff than the mainstream. Although, I've been getting more into Chinese webnovels and webtoons. Unfortunately, I was cursed with the inability to play anything but casual or puzzle games (and even then, I get motion sick from some).

My favourite genres (when it comes to entertainment) are fantasy and sci-fi, but for writing, I haven't stepped out of the comfort zone that is Modern yet. Been laying low with 1x1s; currently trying to expand into Casual groups. Oh, I also think that I like to world-build, since that's what I did most as co-GM for my ex's DnD campaigns. As mentioned before, I'm slow at writing, so I'm reluctant to take on more than a couple RPs at a time.

I swear I'm not a cannibal or creep, so please feel free to shoot me a PM for anything ;p

In Behavioral Analysis Unit: What's to come → 8 mos ago Forum: Casual Roleplay
Oh my god, you guys, just as I came back to after being offline for nearly a month (jokes)

@Lord Wraith Congrats, again, and best wishes! There's a surge in travelling due to restrictions being lifted everywhere, hope it hasn't gotten too bad yet.
In Behavioral Analysis Unit: What's to come → 9 mos ago Forum: Casual Roleplay
Chris Aguilar
Criminal Psychologist
Chris signed 'ok' with her hand to Lucian to confirm that she'll call for his help when needed. It was nice knowing that her boss has her back. It'll all depends on the situation when they get there though.

It was a pleasant surprise when Joseph defended her. Maybe it was because they were both on the science side and saw thing similarly. God knows how annoying it could be to talk logic with the other type. "Thank you." She made a small gesture to the old doctor. Being introverted aside, who doesn't like the feeling of confirmation and approval, especially when it came from a senior.

With the doctor on her side, Sam also quickly apologized for her overreaction. Chris didn't blame her, nor was there a right or wrong in this situation. It was just the type of person Sam was - always looking out for those around her. Helpful most of the time, but not the greatest mesh with Chris' late-occuring rebellious phase. Chris stared at the older woman for a moment, before nodding. "Will do." When the team started talking about the absent members of the team, the young psychologist's hand opened and closed a few times, as if about to do something. She didn't want Sam to be feel bad about what she said. She was the one of the few who kept trying to befriend her when most people had long given up with how closed off Chris was. In the end, her hand remained at her side.

Lucian's reaction to Darin spelt out a bad ending for her fellow newbie. It wasn't her place to comment on any of it. Work is work, and the boss is the boss. Although, it seemed like the long weekend had also taken a toll on Sam, with how much she'd misjudged the appropriate social distances already. Well, at least Chris didn't fall asleep in the bath or anything.

Sam brought the conversation back to the case at hand. She had a point. The lack of strength could explain the lacerations. Could he have targetted petit women for this reason? Does he have an inferiority complex over his lack of physical prowess? Assaulting these women would make him feel powerful. Military widows... Maybe revenge on his abuser who lost their life serving the country? To rape and kill the wife of his abuser - the need to feel power. What about abused by a family member? Oedipus complex in a military family? Spouse or love interest? A tragic love-triangle with a jock, a pretty girl, and a loser? Chris did consider the possibility of a female assailant, but so far the evidence leaned towards a male, especially the sexual assaults part.

The plane was now in its final descent. Chris tried to pounder more on the unsub and their victims, but the reality of her being out of the office started distracting her. She decided to give herself these moments before she needed to focus. All in all, she was rearing to go the moment they land.
Interactions: @OddApproved@Artemis Arts@Lord Wraith
In Behavioral Analysis Unit: What's to come → 9 mos ago Forum: Casual Roleplay
My dumb ass thought lacerations meant something else the whole time orz

The draining blood part... that's not in the report the team recieved, right?
In Behavioral Analysis Unit: What's to come → 10 mos ago Forum: Casual Roleplay
Congrats, Lord Wraith! Good luck on the rest of your planning too.

Ive been busier than I thought recently. I'll probably be able to post something next week though.
In Behavioral Analysis Unit: What's to come → 10 mos ago Forum: Casual Roleplay

Evierose #'s
Case 1 = 25
Situation: Nothing significant
Case 2 = 79
Situation: Something, migraine, health, etc... ends up distracting you from your work even if you decide to go to work.
Case 3 = 14
Situation: A face-to-face confession causes you to figure the case out but you might be placed into a difficult situation
Case 4 = 52
Situation: Surprise, you're kidnapped!

Like everyone else, comments, concerns, or questions about the outcomes, talk to me.