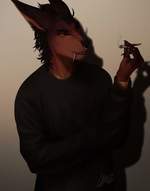 Here lies a man of a kind, Single to none he had created a mind, through the light and dark he had always tried, to be the best he could despite the crimes, he endured much, became what he had shunned, everything he had done, acclimation from one, blessed and favored he ran to his destiny, a wolf he became to fight off the 'integrity', of all those that lied they'd hide in what shines, the true sickness of our world, the liars that scribed, convinced the sheep to follow the blind, that their ancestors had preached since the dawn of time. To the death he fought for the lives of the lost, never again did he allow those he loved to be crossed, a sheep to a wolf, the ultimate regression, though to him to fight the wolves was nothing but progression.

Hey, I hope your having a great day. Hit me up together we'll make, Our dreams come true, lets go and create.

Heterosexual, Though in rp I can do Bi aswell (Me being Dom)

I enjoy all kinds of RPs... Though mixes of genres are the best for me.

I don't have much preference, your enjoyment and participation is my question. That I will answer to the best of my ability. You do the same for me, it'll be hard to get rid of a G.

If you have a problem, a hurt, or a lama; Know that I'm here to take some of the drama.

I love you for you, I'm not interested in fallacy. Know that I fight for you, as your health is what's best for me. Universe bless you for reading. Now lets go have fun, share laughs and cries until our hurts are gone.

In Hello Villains, Care to Associate? → 1 mo ago Forum: Introduce Yourself
@Vampiretwilight Wow.. You have some great Roleplay Ideas.. Literally right up my alley. Bodyguard type rp's are AMAZING. Seems like you lean more towards the drama/romance over the action/war type stuff which typically I think the best of those are mixes of both as you said in whatever page I saw you say that in. I'd be 100% down to try something with you sometime if you were interested. Just an fyi, I'm going to start my 2nd year of college here in like a week but its all online so I should be able to still be pretty active. Im Assuming your on the discord?
In Hello Villains, Care to Associate? → 1 mo ago Forum: Introduce Yourself
@Vampiretwilight Yea, Lmao. I figured it would be, but I wanted to just give those interested a general idea of where my head is at. THANK YOU for the welcome! ^^, Also. Im trying to update my status however it says that I need to make a post on the forum. Does this not qualify?