STATUS: Just got my second dose of vaccine. Here I come, bed. 7 days ago

7 days ago
Current Just got my second dose of vaccine. Here I come, bed.
1 like
11 days ago
I just want to crush the Thalmor.
4 likes
17 days ago
Whatever status you guys are on about, I think it's gone.
25 days ago
Oh, you mean the restaurant.
26 days ago
Yeah, roleplay partners can be unpredictable. The best you can do is communicate openly with those you play with. They deserve to know at least a little bit. They're waiting, depending, on you.
1 like

Guess I should write this thing, huh?

It's me, Citrus Arms. I'm 30(noooo), married, an aspiring indie game dev, as well as a hobbyist writer. Well, who here isn't. I've been meaning to write a book, but that's a big project and I've yet to finish one. Plotting a whole book is hard work, man.

I'm open to 1x1s and group RPs, feel free to invite me to something. I'm also part of a discord RP server of an old friend.

My favorite genres are fantasy and space, and I've got an original Universe that blends the two together. It's a post-apocalypse place, so there's everything from straight fantasy worlds to post-apocalypse survival available within the setting. Don't expect things to get too bleak, however. The universe recovers and grows stronger in unity, is the theme.

Just as she was thinking that her combat ability would dull against the mooks escaping the brawl to try and recapture the wolf, a dread cry filled the air. Regan, as everyone else in the vicinity, flinched. She turned to face the new threat behind her as her opponents fled, watching with a measure of horror as the already large wolf became monstrous. What was happening? Could witch familiars use magic? It seemed too painful and sudden to-

The only poacher who didn't run got eaten, and then it was her turn. Two sets of eyes gazed at her, likely not recognizing her and registering her as a threat. The beast lunged at her and she lept aside, using a shockwave to help propel herself. She took an experimental, defensive swipe at Talos, just catching a bit of his flesh with her sword. She examined the edge of her blade quickly.

"Good. No blood." She didn't think there would be, but she could never be certain until she tried it. Somewhere behind all that fury was the desire for peace. Most creatures went unscathed, but she was never sure until she tried it

Still, it wouldn't do to overwhelm the beast with pain if she could help it. Only a thoroughly peaceful soul would recieve the blade without pain or injury. Regan took a measured breath, centering herself before she took the offensive. With a shockwave to propel herself forward, Regan slashed at the wolf's legs, vying for whatever side might be further away from that snake head. Fighting that thing might be trouble. She'd have to get a little violent if she got swallowed, and that wouldn't do at all.

She jumped herself back over Talos with another shockwave, lashing out at the sides of its back with the shard of night in her hands. She was careful to avoid the spine, however. Inducing that kind of shock was something she normally tried to reserve for... the poachers, for instance.

The swordmaster would land and tumble away, but not before making another slash at the other front leg. She had to stay away from that snake head... Surely, it would come to try and swallow her. She should be able to defend herself by deflecting it's teeth, if it did.
In Fenixtear - A Fairy Tail RP → 22 days ago Forum: Casual Roleplay
Trinity Algretto
Fenixtear Guild Hall 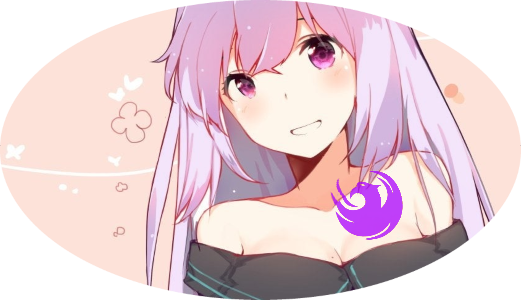 The sudden tension in the air when the door opened didn't distract her. It was a musician's job to keep playing. But the 'friendly' attack did interrupt her, her fingers stopped dancing and she clutched her instrument reflexively. She knew these two faces to be guildmates. That one would attack the other, here, of all places. If it hadn't been a cheap shot, maybe it would have been different, but the apparent viciousness behind this particular vector... It made her incredibly uneasy.

Ronan was there to save the day, however. The man proved nimble, incredibly so. Got Tone in some kind of hold and the fight was over. He must have noticed the tension, like she had, and gotten up from the bar to do something about it. The fight was over before it began, however, and Trinity shook herself from her nerves. It was fortunate that Ronan was here.

She noticed she'd been holding her breath. "Carmilla," Trinity cooed, nervous, reaching down to pet the wolf for the soothing of an animal's fur under her fingers. She watched as Tone and Ronan separated, Tone seeming... Somewhat calmer. But the sanctity of the peaceful air had been threatened. She knew this feeling... but she wouldn't go anywhere this time. She'd been establishing a successful business for herself, largely independently. Ria had helped her establish herself, and she would feel terrible to throw that away. No, she would not be dissuaded so easily this time.

Enchanted Forests weren't something she navigated often. She could safely say she'd never had the opportunity to patrol one, or any forest for that matter. It made navigation in a pinch frustrating, but at least she knew enough about this one. Shiro confirmed that for her. The lanterns.

"As long as he doesn't do anything stupid, he should be fine." Shiro's description of Argus did not help alleviate concerns, but they had greater priorities, as well. Surely, Argus could take care of himself, being a guild mage.

When Shiro bid the two of them to withhold, Regan had already been considering it. She gave a nod in response, and lead the both of them into the woods surrounding the battlefield. She would wait for an opportunity to turn things around presented itself. Shiro took her leave, to assist their battlegroup's leader. He'd gotten pinned, and had some sort of... Telekinetic or control magic protecting him, with swords. Shiro was confident, so she'd let her handle it herself.

Two of the poachers broke away from the fight and approached Talos, one bearing more capture gear. Regan was able to approach from behind, with the din of combat covering her movements. One sucker punch and a body toss later, and his buddy had noticed. This one was armed with javelins, and he took one in both hands for close combat.

Regan drew her sword. It looked more like a shard of the night sky than any sort of metal, what looked like the stars ever changing in the reflection from the black body of its blade. "You don't want to fight me." She kept a cool, calm gaze on her opposition, maneuvering her position to put herself between Talos and the poacher.

"Like 'ell. There's gold in this pelt." He threw a javelin at her, for it to be deflected. Another, and another, all cut away by the shard of the night sky. He ran down to his last projectile, groped for another and found none.

He charged her. A thrust aimed for her chest, Regan stepped back and pivoted to the side, past the attack. One hand left her sword hilt and grabbed the weapon, pulling the man further through his thrust while the other jabbed with the butt of her sword. She hauled the man up on her shoulder and shot him off with a directed shockwave, into the woods where the forest could catch him. Or not, she didn't mind either way. She saw Shiro had handled herself well, Regan wondered what kind of magic she used. Some kind of... Alteration?