STATUS: Getting caught up in the undertow. 2 yrs ago 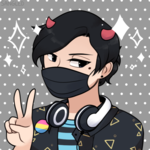 2 yrs ago
Current Getting caught up in the undertow.
2 yrs ago
New year same old bullshit.
2 yrs ago
Retreating back to reddit and discord to work on the comic. If ya wanna write with me- send me a message. And have a safe holiday ya filthy animals!
2 yrs ago
Welp. This is turning out to be a bust. #yeet
1 like
2 yrs ago
Its beginning to look a lot like f*** this.
9 likes

"Uh... hey" *waves awkwardly, clearing their throat* "I'm Arti."
I make art in all forms, and I'm revisiting my old infatuation with roleplaying and storytelling. I don't have a preference on gender, so you'll probably see me write as all 52 of them. Also I'm in the PST time zone, although I write anytime really.
▪️
Currently writing/drawing a new comic. I have a few OCs and story lines that need fleshing out.
Follow/inspire me on my IG account www.instagram.com/artifeximpar
▪️
Looking for interesting characters to fill my not-too-fantastical fictional settings. I prefer/only use discord in conjunction with google docs. I have a server with various themes/settings with the ability to add more.
So far the settings include:
1100's arcane forest, 1500's time-traveling pirates, 1880's steam/dieselpunk, 1980's lovecraftian boardwalk, 2050's moon colony, 2080's green antarctica, and a general dungeon to get all the kinks out.
-
If anything looks interesting, please send me a message. (21+ only)

In Any old school aol role players ? → 2 yrs ago Forum: Roleplaying Discussion
Yes. That and AIM, yahoo messenger, and neopets. I use different screen names now but yes, I was around then. Prolly why I gravitate towards discord tbh.
In [Fabula Imperium: The Story Realm] discord-based, 21+, time and genre spanning roleplay → 2 yrs ago Forum: Advanced Interest Checks
Just created a discord server to flesh out ideas and stories for my comic book, and a friend said they make good settings for RP. The settings span across time and themes, a little bit of everything for everyone. The following settings below are already up and running, and we would love to add more:

1137-Arcane Forest
"You exit a damp, dark grove of trees that opens up to a magnificent view of cliffs and waterfalls spilling over lush forests and emptying in a valley below. Heat warms your face as you narrowly miss being scorched by a phoenix in hot pursuit of it’s prey. That distracts you temporarily from the gleaming alabaster rooves of little houses dotting the edge of the lake. A large castle looms in the distance atop a mountain and is silhouetted by lofty, tumultuous gray clouds. You can hear the off-key screeching of a lonely drunk bard in the distance."

1546-Time Pirates
"A small team of marauders and murderers aboard a ship are always racing against time collecting things for the queen under her majesty's well-paying contracts. Other fleets have been popping up in direct competition with the team and threaten their standing with the court.​ They race against the clock trying to gather the queen's bounty before the other ships. One day, while searching for a sunken chest, they come across what appears to be a smooth gray casket with no seam, hinge, or lock. They pull it aboard anyway, not knowing where or when its from..."

1889-A Wilder Westpunk
"You awake from a nap as you feel the lurch of train cars slowing. Passengers around you start gathering their belongings as they prepare for departure. Through the hiss of steam and brakes you can start to see the city beyond the fog. The wide mouth of a bountiful bay lay open like a snoring beast. Soot and smog color the skyline magnificent purples and oranges as airships and zepplins zip through the sunrise like busy bees.

As you step off, a gentleman on an odd contraption of wheels and gears whizzes by you at incredible speeds, dusting you in soot and smoke. The scent of moss and diesel mingle in the foggy air beckoning you to follow."

1987-Radical Tentacle
"Sleepy seaside town that has had nothing interesting happen ever, suddenly has an uptick in disappearances around the same time as a dark weather front settles on the area. Crazy old coot who runs the lighthouse swears on their life it's monsters from the deep. Owner of the local headshop and apothecary claims it's the Old Ones. Paranoid parents are moving to ban children from playing with DND or Ouija Boards. Meanwhile, some weird things keep happening in town, and bizarre folks keep showing up out of nowhere."

We successfully harvested our third crop of apples this year. The cycles of gestation and growth are significantly sped up from earth's. Outside of the domes the terraforming has slowed as we are running low on resources. A leftover mining camp has offered to keep digging ore in exchange for food. This is extremely profitable for both of our teams, as we have both lost communications with Earth over 6 months ago.

We have had another suicide, Dr. Martin Patel walked out of the dome without a suit one morning, after weeks of being on watch for mental instability. This is our 5th suicide in under 2 years. We believe it's due to the stress, although we have been rigorously testing our food, water, and air, for any bacteria or parasites to be safe.

Researchers Dani Perault and Bartholomew Hill are still under quarantine after their contact with what we think was radioactive material, last month. They do not appear to be having normal reactions, in fact, they appear healthier, and vitals reflect those results. Further testing is required."

2082-Green Antarctica
"You are aboard the Research Vessel Grimhold with a group of scavengers, researchers, and archeologists surveying what's left of the southern cliffs of South America when the boat gets this coded message from one of the patrolling FIGs:

If interested please reach out, there is a brief history as well as some NPCs to keep things moving. 21+ only as we do have a NSFW kinky vampire dungeon channel for those plot lines.

Now I'm intrigued on what colors Melanie Martinez songs are to you. I don't know why I immediately went to Melanie but I did.

It says “Impressive Wingspan: What I Look For In A Man.” On the front and on the back it says “Wingspan, If You Know What I Mean.”