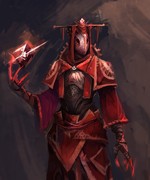 Bio
I usually haunt the interest checks of others as I am surprisingly shy about putting myself out there for other people to judge my work and my characters. Typically, it's easier for me to make characters for others than it is to expect people to make stuff for me. But nothing ventured, nothing gained, eh?

-Call me Sar. My full name here is a mouthful but if ever you're curious as to the story behind it, I will happily tell.

-I'm considered old for writing on sites such as this. (Mid-30's) But this has been my hobby for decades and since writing is my main source of creativity, it can get lonely writing by yourself.

-My writing style is 3rd person, past tense; but the posting length varies. If it is engaging and epic enough, I can write novels. If it's casual and conversational, then 2-3 paragraphs are the norm. But I always try to provide some meat to the story.

-I love ooc chatter. I'm socially reserved irl, but behind a screen, you are my new friend and I love you. You are a people and I am a people, so let us people together. I love to hear about your day, I will celebrate or commiserate with you about stuff.

-I am mostly on mobile, so this can affect the speed of my posts. Depending on how much I need/want to write is limited to how fast I can get the words up on my little screen.

-I am relatively ghost friendly. It is hard sometimes to get hyped up for a concept and then when you actually start writing, you know you can't sustain it. I understand. I have felt it more times than I can remember. If you need some time, let me know. If you just can't, let me know. If you don't want to let me know and you just want to quietly slip off, I will totally get it. I would hope for the same courtesy in that regard and I won't bug or hound you for anything. That being said, if you have reserved one of my plots and taken more than 2 weeks to say anything to me at all about not wanting to continue, I won't bug you, I'll just quietly open the idea back up to anyone else who might show interest.

-Be open to chatting with me as well. World-building, character creation, story ideas, vent about coworkers, cheer about good things. You are a people, I am a people, let us be people together.

-Age doesn't matter, within reason. It may limit some topics I feel comfortable writing with you about, but I have done ttrpgs with people who were both much older and much younger than me, and have no issues writing make-believe with anyone. That being said, there are some story concepts I have that I may not feel comfortable writing with someone half my age, not because I don't respect you or believe you can't handle it, but it is simply my comfort level. If you are a minor and want to write any of my plots, that is fine, I will simply have some specific details that I may not go into depth with you in the story for my own sake.

-Be patient with me, and I will extend the same courtesy. We all have lives and stuff happens in them. This is a hobby for me, and I don't want you to feel obligated by me to stick to a schedule or length. But I pick up on habits and when one goes from writing every day to going a week with no word, I worry about you.

-Be somewhat active? I'm not expecting multiple posts a day. Heck, I can't sustain that unless I write like...tiny posts on my tiny phone screen. But if you feel that you would take a rather long time to come up with a reply on a regular basis, please know that I will lose the passion for the story before it has a chance to grasp me. A response every couple days of just two or three paragraphs is nice.

"All right Sar, yadda yadda, get on with the good stuff!"

Okay okay! On to the plots and beans! I'm a sucker for romance, and expect a relationship to build between our muses. But given ages of writing partners, and the actual character I am writing, there will be a strong emphasis of the emotional attachment between character, not just physical. Some of these are just concepts, some have dedicated characters I will put to them. Some are based on my fandoms, but you will not need to know the source material. Some are strictly MxM, some I am open to other pairings, even gender swapping certain characters. I will indicate what is which and where. For all plots listed below, you will play Muse A.

Music of the Night (MxM) 1/1
Muse A is studying theater in college, looking to make it onto the big stage one day. After winning a theatrical competition, the class is awarded a trip to visit the Paris Opera House to perform their rendition of the Phantom of the Opera, with Muse A as the leading role of the Phantom. But what if the dark stories were true? What if there really was an opera ghost? What if he still roamed the halls and dark shadows? And what if he turned out to be super critical of your portrayal of him and had no issues letting you know?

The Turing Test (MxM, open to MxF but need convincing. Shamelessly inspired by Appleseed.) 0/1
For years, the military had been designing and testing the latest and greatest robotic soldiers. Gone would be the days of wounded warriors and loved ones returning home in flag draped caskets. No more would the acronyms if KIA, MIA, POW or anything else of its ilk be used to describe the status of a soldier's name. The Titan Units were supposed to be the answer to that. State of the art military robots of humanoid stature would fight on the battlefield instead of precious human beings. The unprecedented power of the Hecatonchires AI system ensured an almost precognizant ability to fight and command a battlefield. And the Battle/Recon/Intel 4-Rho 3-Omicron Superior class unit, "Briareos," was ready for field testing. Muse A specializes in programming, technical repairs and engineering, and data analyzing. They are called upon to do repair work on a severely damaged Titan unit that failed a field test. But something isn't right. What could reduce such a powerful entity to such a state? And why does it portray very human behaviors?

Aliens are real. We always knew they were, we made a bunch of movies about how we would deal with them if they came here. It seemed the dumbest idea at the time, but the government had actually approved many of these films to be made using depictions of the actual aliens themselves, or close likenesses. This made it easier to convince the public that such creatures were mere fantasy, the creation of a writer's imagination and a director's vision. Such epic science fiction encouraged Muse A to make a career out of studying such things. Inexplicable feats of human engineering in the past, sudden leaps forward in advanced technology, they became a leading scientist in the field of unexplained advancement. So when they are contacted by the government to assist with a project, they aren't prepared for the truth. The government found an alien. And they want to wake it up.
-Ideally, I would like this to be based on the Predator franchise. I am willing to have this be a more generic alien concept as well.

Late 1860's: News had spread across the world of the great sea monster ravaging ships on the ocean. Sinking warships and damaging cargo vessels, those who had survived told of a creature of unimaginable power, able to take down warships with a single blow from its powerful frame. What could this legendary beast be? Muse A is the child of a prominent marine biologist looking to break free from their father's shadow and make a name for themselves in the scientific community. To hunt down and find this creature would be a feat that would put their name in the history books for all time. But one fateful trek over the roiling waves will change their life forever.
-Inspired by 20,000 Leagues Under the Sea. I have a pretty specific character concept for Muse A in mind, though I will leave some wiggle room for creative liberty. I also have a specific spot I want the story to start as anything before this point essentially makes us write two separate stories until our characters meet.

These are just a few concepts I have at the moments. I will add more as moods strike. Also note that I cannot take on too many of the same idea at once as it makes it difficult to keep track of who is doing what. I prefer PMs or Discord as I like to keep my writing personal.

Thank you for reading. If any of these ideas interest and you have questions or want to write with me, please PM me. Have a lovely day!
↑ Top
© 2007-2017
BBCode Cheatsheet