Training naked was...new. Celeste raised an eyebrow at the chatty warrior as the trio headed inside. What sort of training required stripping down? It sounded a little barbaric. Commoners must have a field day with such a suggestion. Her own education was nowhere near as colorful, though she wasn't much of a physical fighter in the first place. She decided not to comment on that for now, but she did agree that it was better to be out from the cold.

She had only been out in the cold briefly, so she wasn't as relieved to be back inside. Sanji didn't speak at all, though Kallun carried much of the conversation. He went so far as to suggest a race of sorts. Celeste let out a genuine laugh at that. Running? In these heels? He certainly had a sense of humor, these may not have been her dancing heels, but they were far too fine to ruin just to jostle along a road in a race she was unlikely to win.

"You're asking a mage to partake in a race?" She asked Kallun, raising an eyebrow. "Darling, I'm a dancer, not a runner. If I wanted to run around, I would have chosen better footwear. Not to mention these heels were worth more than the furniture in this room."

If she wanted to be a runner, she would have chosen to be a swordsman, not a bard.
@Rethel34@KenjuGuy
Hidden 7 mos ago Post by Rethel34
Raw — 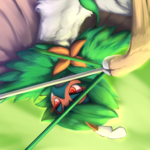 Interacting with @Hero @KenjuGuy
The suggested nudity of his fellow mercs barely fazed Sanji anymore; he had seen many of them in the buff (or fairly close to it; such depended on whether the person in question was wearing smallclothes beneath their outerwear when they needed treatment and the exact location of their injuries) when treating them for this or that. One of the side-effects of effectively being the company physician, he supposed. Though he caught a glimpse of Celeste's attempt to hide a startled expression at Kallun's implication. Come to think of it, Celeste didn't tend to ever end up with more than a small scrape, and Sanji couldn't think of a time that even he had seen her disrobed. Of course, she wasn't one for combat, so for her to end up needing treatment would be a rare occurence.

Next Kallun rambled about a race and slothfulness, and Sanji momentarily thought the swordsman had lost his mind. Though he definitely found Celeste's response amusing, especially when concerning the value in her shoes. He wished he could have that amount of gold lining his trousers. At last he chimed in, albeit a bit tersely, "I have to agree with Celeste. If I were to run with this bag in the state it's in, I'd lose its contents in moments. And if I were to leave it to sit somewhere, the people around here would be jumping at the opportunity to snag the medicines for their own. I'll pass."

Not to mention, he thought, he had already been up and at work well before the sun had decided to share any of its light with Drakesfoot. He wasn't about to die of lethargy, though he couldn't expect Kallun to know all about his morning activities. Thus, he continued warming his hands. After a moment, he dug some coin out of his pocket and counted the few marks he had. Maybe, if he was lucky, he could talk some local merchant into selling him a replacement satchel, even if it was something of less-than-desirable quality. He repocketed the bit of gold and decided he'd continue warming himself a while longer, then set out for the marketplace and see if he could find something that might work better than his current kit.
↑ Top