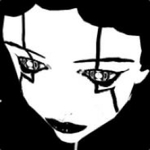 About me as a player.
When I make a character I consider every aspect of the character—and the context of the universe it's in—from its nature and demeanor, to its ambitions and motivations; and quirks, strengths, and weaknesses. Did I need to say all that? No, not really, but I felt like correctly using 'and' five times in a sentence. The reason I give such consideration to these characters is because I come to RP to for the challenge of being someone other than myself. What I would do in a character's situation does not interest me, and it's not the point. Knowing the character as well as I know myself means I can do what the character would do and really feel the weight of those choices.

About me as an author.
I consider all play-by-post games I play in to be a form of interactive, co-authored stories, where in the characters all play a part; and as a consequence all authors play a part. When I engage in collaborations I try to make my character's goals and motivations as clear as possible to the other authors I'm engaging with, and trust they will respect the game and not meta-game that knowledge (particularly: Using out of character knowledge to make in-character decisions). I've observed that this is the most difficult line for other players to walk and I find myself entering into collabs sparingly with anyone I've witnessed not delivering on a pattern of excellence in this regard.

About me as a person.
I have years of experience in LARP, Table-Top, MUDs & MMOs and more. I've been role-playing longer than the average millennial has been alive, and have played just about every kind of character—in every kind of medium—there is. I've also written a bit of fan-fiction (FiMFiction) and original fiction, as well as served as a serious editor for both. I don't mention my experience to brag. It's just a fact. I'm not being modest either since I don't believe in it. Modesty and Arrogance are two sides of the same coin. Understating one's abilities is just as dishonest as overstating them. Doing either is a sign of insecurity, and a deception perpetrated with the intent to garner respect or sympathy. If I'm starting to sound like a super villain, well, there is a reason why.

If you like Ponies, and my brand of RP, then why not read some of my horse words?

In Pokémon: Hoenn - Make a Wish → 2 yrs ago Forum: Advanced Roleplay
returns from the dead, stretches, blinks, and looks around.
Hey, do we have a discord?
In [Denied] Mylar LuSan - Inquisitor of Esoteric Study → 2 yrs ago Forum: Character Submissions

Actually, what I you said was this:

My response to that was this:

You never asked what that meant. You only told me it was wrong. I have since made this clarification in a still ongoing investigation:

It would be most pertinent for you to wait for the collusion of that investigation before continuing to involve yourself.
In [Denied] Mylar LuSan - Inquisitor of Esoteric Study → 2 yrs ago Forum: Character Submissions