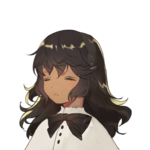 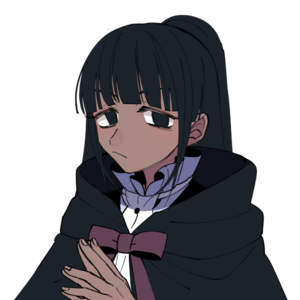 The wizard awakens from her afternoon nap, the call of her bed failing as she hears a familiar telepathic voice echoing in her mind. Officially called to action the teen would transform in a dramatic flurry and make way to the disturbance, eyeing the barrier from afar. On her handy staff, she would reach the invaded building, legs crossed as she observed Robin and Momo enter through a broken hole in the building.

From the air, Ayaka would dismount her staff and grab it with her left hand, and then aim it towards the building. Silent in her casting the crystal of her staff would begin to glow a dim purple, a magical circle forming at its end and drew itself to completion, and once it finished a wave of magical energy surged from the crystal and towards the building. A sigh followed afterword and Ayaka remounted her staff, eyes glowing as an aftereffect of her spell but now she could see the inner workings of the building and those inside.

"We need to separate the unconscious civilians from the Pageless..."

Ayaka would say to her teammates telepathically with a tired voice as she hovered only a few feet away from the office building. Quietly observing as she watches out for any strange misdeeds during the course of the battle, preparing an assortment of spells if the situation were to turn sideways.
In The Crazed Kingdom, Gabaras → 14 hrs ago Forum: Casual Roleplay
@Pirouette

Hey on discord I let everyone reply to their posts and possibly play around a bit! Here's the exact message...

Okay. So yall can definitely respond to eachother but not too much! Alot of the information on Gabaras will be given the morning of, otherwise Ill let some light dialogue slide and then once you guys are finished you can end your post with it being like night or something and falling asleeeepep

Otherwise you still have a bunch of time left c;


On another note, spots are still open! Refer to the zeroth post on the first page as to how many there are!
In Grimoiric Heart - A Magical Girl Adventure → 2 days ago Forum: Casual Roleplay
How's the progress goin' cap? :O
In The Crazed Kingdom, Gabaras → 3 days ago Forum: Casual Roleplay
@Pirouette
Hey! Just sliding by if you wanted to join the discord-- if not that's totally fine! <3

In The Crazed Kingdom, Gabaras → 4 days ago Forum: Casual Roleplay
Everyone is good to post! I'll give it about a week and half until I stsrt pestering people to do their paaart, otherwise I'm just waiting on Wander to finish his details and we should be good to go! When wanders done there should be about five people, three more spots are available but I don't mind if they aren't filled! Either way I hope yall take your time and let's have a good rp!! :]

Please dm/pm me if you have any questions.
In The Crazed Kingdom, Gabaras → 5 days ago Forum: Casual Roleplay
@WanderingDragon

I especially like how you've described your magic and how their mana flows through their body. I should probably emphasize how mana veins affect magic but so far everyone's doing really cool stuff >:D

I just have a few questions, your character is a half-elf and 20 would most likely be like elven stages of infancy or childhood, but I'm not too certain since your character is HALF HALF elf-- ashdahdas, either way, there's not BIG problems here it's just a slight nitpick.

Other than that your character is good to go and can be thrown into the Character Bin!!! >:D

Your character spells "Arcane Sense" is just a flavored Arcane Sense that every mage knows so if you want to replace that ability-- that's totally fine!
In Grimoiric Heart - A Magical Girl Adventure → 5 days ago Forum: Casual Roleplay 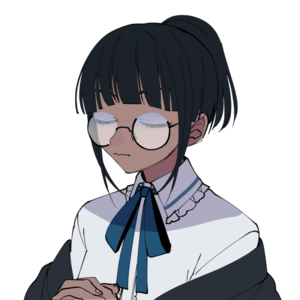 Height : 174cm | Weight: 140lb | Age: 16
Name: Ayaka Meru
Appearance:
Transformed
In Ayaka's transformed appearance she sports the same exact outfit from the reference but without the headband and glasses. Her physical appearance stays primarily the same as well but her hair has lengthened to her back and a long amethyst-colored ribbon holds half of her hair up.
Description: A lackluster and lazy student, Ayaka is brazen as she is broad. Open with her opinions but simply too lazy to tell them. Sleep and the lack of is her prime enemy and attacks her anytime throughout the day. But the few occasions when she is focused or awake, she's either serious, often cold, or ready to win any sort of battle. Determination may not align with Ayaka often but when she hones on one thing, in any situation-- she will get the last say.

Grimoire:
• Title: Merlin's Prophecies
• Description: A tale of an old wizard and his exploits. Known for his patience and wise guidance, he has fought off dragons and aided a king to rise for their nation. Well known for his magical gifts, Merlin is an exotic sorcerer who helps from the shadows.
• Abilities: The Prophecies of Merlin grants Ayaka the ability to conjure a staff of which she mainly uses to aid her teammates from afar casting shields and healing injuries. But can also cast heavy-hitting elemental magicks, although, in exchange for destruction, she must wait patiently to thread her more offensive spells together via runes, magical circles, or a sacrifice of an object.
Misc:
Sidhe Staff
Instead of a white crystal and a smaller dangling crystal both are purple.
In Grimoiric Heart - A Magical Girl Adventure → 5 days ago Forum: Casual Roleplay
@TheWendil

The Amber Grove's are specifically a collection of cities/tribes that function under a council. The Kogan's have the Kogani city and the people of Gabaras have the city of Gabaras. So you're completely fine in that aspect!

I should also provide this image for anyone that isn't in the discord!

Toyomo is now Kogani, and Au'sara is now The Amber Groves. Anything outside of Somnius is considered the old world!

As for your actual sheet, it looks amazing! And worry not, the way you've described your magic is a perfect fit! Surprisingly everyone currently is in some manner leaning towards hand-focused mana-veins.