1 User and 4 Guests viewing this page 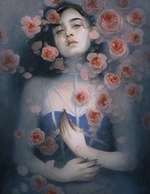 11:00pm. This was when the newest arrivals of the Young Justice team were expected to meet Red Tornado to be welcomed to the sanctuary and more importantly, the rest of the team. Several other teens had arrived throughout this week. Much like the Justice League, they all had their own quirks and identities. He expected three new faces today, but was also tracking yesterday's arrival being a part of the initial tour of the Secret Sanctuary.

A few steps away from Red Tornado one of the new arrivals waited with him, having gotten there early, standing quietly next to the silent android. Daphne adjusted her sunglasses, pushing them back up her button nose. They hadn’t said a word to each other for the past fifteen minutes aside from a polite greeting. It was difficult to get a feel of his expression, since his metal face remained blank the entire time. It made her a bit uncomfortable, was she supposed to say anything? Fifteen minutes of silence was kind of long right?

When he suddenly started to speak Daphne nearly dropped her backpack.
“Follow me inside” His voice while definitely robotic wasn’t as monotone as she expected.They hadn’t spoken much, but it was easy to get used to. The android promptly turned around and walked through the underground entrance at the base of Mount Justice, without actually looking to see if the teens were following him.

They started the tour in the common area.
“There is a kitchen at your disposal where you may prepare food and eat it.” Red Tornado stated simply. Granted a tour usually wasn’t all that exciting to begin with, but having an android explain the functionality of a kitchen, well you get the idea.

The kitchen had a large, U-shaped couch, in front of which sat a coffee table and a wall-mounted widescreen television, with a variety of gaming systems attached to it. The lounge’s perimeter was made up of bookshelves that reached from the floor to the ceiling, containing a collection of the widest possible variety of books, both fiction and non-fiction.

“Any questions about the use of this room?”
He regarded the young heroes with the same set expression.

Taking their silence as a yes, he continued onwards.

They visited the dormitories, the gymnasium and the meeting chamber. All rooms accompanied by the same dry instructions of Red Tornado. The teens by now were getting admittedly bored, some showing it more obviously than others. If Red Tornado even acknowledged this fact he didn’t do anything about it, he merely carried on, as he was required to give them a full tour of the HQ.

Required until more pressing matters caused him to suddenly stop in place while leading the group to the next location. There was no indicator of someone else contacting him until he verbally answered to seemingly no one.

"Affirmative…" He paused and looked at the group he had been touring around and made a not so empathetic decision. "You three will remain here until I return to complete the tour. I should not be long." He gave a nod to the group before heading towards the Teleporter Room and leaving the sanctuary utilizing the Zeta-beam tubes. He left the teens to assume there was some important Justice League matter that needed his attention.

"That's unfortunate." Viktor finally piped up from the rear. He'd been quiet the entire time, observing and listening to everyone in his company. He had roamed the Sanctuary the night prior, but was looking for more insight from Red Tornado on every location within his new home. "Hmm."
2x Like

”Finally, I thought he’d never leave!” A voice could be heard saying. “elkraps wobniar!” Suddenly, the room filled with multicolored flashes of light for a few seconds, as Zachary Zatara made his entrance into the room. “Hello everyone. I’m Zachary Zatara! Better known as... sthgil ni eman ym etirw“ He pointed his wand up, and the words Zatara the Great were spelled out in purple glowing letters for a moment before they faded away. As he did, he took off his top hat, and took a bow.”You may know me from Youtube. I’m close to a million subs. Like and subscribe! You... may also be familiar with my cousin. Zatanna Zatara...” He sneered for a moment as he mentioned that. Everyone knew who his cousin was, and it bothered him having to live up to the standards set by her and his uncle. Now was the chance to make it big on his own. “Everyone knows I’m the charming one.” The pearly white grin quickly returned to his face.

Then he turned his attention to the handsome boy in the group. That wasn’t himself of course. “So, who might you be?” He flourished, And a red rose appeared seemingly out of nowhere and he handed it to the boy. “I look forward to getting to know you better.” Then he kissed the boy’s hand.
2x Like