Hidden 12 mos ago Post by Tira the Tyrant
Raw —
OP

Member Seen 7 mos ago
Tira the Tyrant
11 posts
in 2273 days
Seen 7 mos ago
Okay, so I've been off of this RP site for... well, it's been a while. like, a looooong while. Anyhow, Star Wars roleplays are really hard to find. At least, well-organized ones are. So when I came ack to this site find this blaring banner of Star Wars RP going, well it seemed like serendipity.

HOWEVER, I have no idea what all this complicated do's and don't and stickler rules are about what you can and can't RP as. And among all these rules, I can't seem to find anything that denotes WHEN these RPs are taking place.

I'll get right to the point: I've had a Mandalorian Merc that I've been trying to get into a roleplay for as long ago as I've made her. It's been ...5 years? 6 years? It's been a few unsuccessful years, and I've been across a slew of roleplay sites. Here's the rub: She's timeline specific to the Old Republic era. Born in 3710 BBY, I'd like to ideally play her in the year 3679 BBY ( with a little flexibility of +/- a year or two). If you've played the SWTOR MMO, it's about 30 years before the events in the game.

So before we waste each others' time, I'd just like to simply know if this is even possible here. The timeline is the first deal-breaker I encounter when looking for a compatible place to RP.
Hidden 12 mos ago Post by Kuro
Raw — 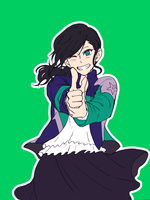 7075 posts
in 2391 days
Seen 11 days ago
@Tira the Tyrant The Star Wars PW is currently in hiatus and may be rebooted in the movie era. As for when or if it will be rebooted, that I don't know, but I can at least tell you to keep an eye out for any update from @Ruby in the future if you're still interested later down the road.
1x Thank

Hidden 12 mos ago Post by Tira the Tyrant
Raw —
OP

Member Seen 7 mos ago
Tira the Tyrant
11 posts
in 2273 days
Seen 7 mos ago
well... that's a total bummer. Not only because it's on hiatus, but because if what you say is true, it will likely come back in an era that reflects pretty much every other Star Wars RP out there.